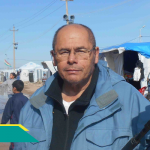 Richard Wolf’s documentary tackles a serious topic of lives of the Syrian citizens who leave their country to flee the war. Their cities and towns turn into ruins and everyday life becomes impossible. Having left Syria, they live in a commune, where, in dire conditions, they try to live their previous lives.

The film was shot in black and white. The director interviews a number of victims of the conflict in Syria. Their stories burst with emotions. The pain and longing for the previous life compete with the awareness of the need to be strong. The only thing they are not able to deal with and, at the same time, what they fear most, is being forgotten by the world – and consequently, abandoned.